Time Travel to the 2000s: A surprising visit to the Canadian NASCAR Series

When Alexander Kühnemund was 18 years old, he went to Canada for an internship – Suddenly, the man from Bochum found himself in the stands of a Canadian NASCAR race – On ‘Leadlap.de’ he exclusively shares his experience 20 years later

When we motorsport fans in Germany talk about the most beautiful pastime in the world and take a look across the pond, we quickly mention the well-known racing series such as NASCAR, IndyCar, IMSA or perhaps the ARCAR series, but then most people stop there.

But hand on heart, who has ever heard of the Canadian Association for Stock Car Auto Racing or CASCAR for short? Ok, today the series is called NASCAR Pinty’s Series and is roughly comparable to EuroNASCAR. But the number of those who are now shouting “here” quite loudly should be so manageable that you could comfortably put them in Bochum’s smallest pub without getting into a big space crunch.

In this article I would like to make a small time journey with the readers, to say it exactly into the year 2000.

In the spring of the year in question, at the beginning of February to be precise, it was clear to all of us that the feared bang at the turn of the millennium was pure disappointment, VfL Bochum was preparing to make it back into the Bundesliga and I was a freshly baked NASCAR fan at the time, setting a small gray game console ablaze with Nascar 98 and Nascar 99.

It was also the time when I should have been looking for a farm long ago, because actually the two-week agricultural internship at my much-loved Waldorf School was coming up in the not-too-distant future.

As luck would have it, the phone rang one evening and it was my good schoolmate Ansgar. He asked me if I would like to do the internship in Canada with him. I didn’t hesitate for a second! And so, at the beginning of April, I sat on board an Air Canada jumbo jet bound for Toronto.

From there, we went on to London, Ontario, where we were welcomed. After a 35 minute drive we arrived at our destination, Sunnivue Farm – yes, it really is spelled that way – near the 902-soul village of Ailsa Craig in the middle of Ontario’s agricultural nowhere.

One morning at breakfast, I grabbed the sports section of the newspaper. After all, you want to know what’s going on in Canada. “Delaware action keeps’em coming back” read the headline and underneath was “friday April 28th Cascar Sportsman, Pepsi Street Stock and Open Wheel Modified.”

I held the ad under the nose of the farmer – a German expatriate – and asked if it would be possible to drive there. He didn’t hesitate for long and told me that it was no problem, because the race track was only 30 minutes away by car, a little east of London. By Canadian standards, that’s really no effort at all!

The race was to start at 8 p.m. and admission was two hours before. The way led over typical North American roads, partly without asphalt, and although London with its approximately 380,000 inhabitants was quite “close”, the rural idyll was omnipresent. At some point, the farmer said that we were almost there and that he would pick us up after the race.

What do you mean, we’re almost there? There is nothing here! A lonely “Fressbude” – as they say in the Ruhrvalley – and a few headlights on high poles. At first glance, it reminded me more of various district league pitches in my hometown, but not of a race track. Especially since the gravel lot in front of it – it was the parking lot – wasn’t really busy yet.

We stood in disbelief in that parking lot, but at the latest when the first V8 roared, not only did the hairs on the back of our necks stand up, we were also aware that we were in the right place after all. At the ticket booth, the ticket for the seat cost a “proud” eleven Canadian dollars, which at that time was about 14 German marks, and we were finally allowed to enter the Delaware Speedway Park.

In front of us, the approximately 10,000-seat grandstand with its simple benches descended to the race track, which was separated from the grandstand only by a small wall and a benevolent fence. Delaware Speedway is a 0.5-mile oval with twelve degrees of banking and, when viewed from above, bears a slight resemblance to Darlington Raceway or Gateway Speedway.

Behind the very wide pit lane, the vans of the respective race teams lined up in the infield. With the exception of one, these were far removed from the familiar sight of the typical NASCAR hauler and there was a colorful hustle and bustle in the paddock. The occasional roar of a V8 engine gave an idea of how loud it could get!

There was a free choice of seats and so we naturally looked for one near the start-finish line. From the entire grandstand one could overlook the race track. In addition to the numerous advertising banners of the local entrepreneurs, there were also numerous floodlight poles to be seen and the whole facility, lined with trees, disappeared a bit in the spring green of Ontario.

Slowly the grandstand filled up, here and there you spotted Nascar fan shirts, there was the smell of the usual fritat and you were occasionally approached by a local motorsport enthusiast.

The people in London, Ontario, may have lived up to the reputation of the polite Canadian, but the clarity of their pronunciation left a lot to be desired, which is why we quickly reached our limits with our meager school English.

Before the actual main races of the Pepsi Street Stocks and CASCAR Sportsman, there were short sprint races in which the drivers had to qualify. Here the so famous Canadian politeness got its first cracks, because especially the local heroes made clear that they were eager to win the races. Cold deformations and smoking tires were the result.

The sun was now leaning more and more into the red evening sky, the floodlights were really doing their best to illuminate the track and so slowly it became seemingly serious, in the pit lane the cars of the Pepsi Street Stocks were lining up.

We rose from the stands, a little prayer was said, two young ladies – presumably from the local school – sang the Canadian and American anthems, well and then came what every fan just waits for, the magic words were spoken: “GENTLEMEN START YOUR ENGINES!”

That moment, when 25 V8 engines are fired up at the same time, burns into your skin in such a way that I still get goosebumps today – 22 years later! The pace car started to move and with it the starting field. This consisted mainly of Chevrolet vehicles, but there were also Ford, Pontiac, Dodge and Oldsmobile.

During the two introductory laps we were able to watch the roaring cars in “peace”, but I was so excited, so captivated by the goosebumps, for a moment the world faded out! The pace car turned into pit lane, the flagman waited for the appropriate moment, and what followed was what any stock car race on a short track oval is all about. The green flag is waved, “pedal to the metal”, full throttle and the whole body trembles under the incredible sound of the V8 engines.

The race of the Pepsi-Street Stocks lasted about 30 laps, there were numerous lead changes and the duels, “doorhammer to doorhammer, bumper to bumper”, to say it once with the words of Bob Jenkins. Nothing was given to each other, which meant that there were some crashing, banging and cold deformations.

After the first stock car race, which I was able to experience live, I was completely out of my mind and it demanded a refreshment. I must have had a big grin on my face, because the lady from the snack bar replied with a cheerful “hey boy, you really enjoyed the race, eh?!”

After the terrific race, a little disillusionment followed. Because with my burger – somehow there were only burgers – I wanted to taste a sample of the Canadian art of brewing. After all, I was already 18, so that shouldn’t be a problem, should it? It remained then in the long run nevertheless with Burger and Coke.

After the break was over, we continued with the main race. On the program were 35 laps of the CASCAR Sportsman Series. While the grandstand had not been too crowded so far, this race attracted a few more spectators, it became noticeably lively and occasionally the drivers were given loud words of encouragement.

The vehicles of the CASCAR – which were similar to those of NASCAR – looked again somewhat more impressive than the racing cars of the Pepsi Street Stocks and from the sound, there the young motorsport heart laughed. Some of these cars were also painted like the “big ones” from the Winston Cup.

One of them was #18, which looked like Bobby Labonte’s Interstate Batteries Pontiac; not far away was #33, Ken Schrader’s Skoal Bandit and even Buckshot Jones’ #00.

The field started moving behind the pace car. 25 times this incredible sound that makes the chest tremble. The pace car turned into the pit lane again, the grandstand rose and, to the cheers of the fans, the field thundered off as the green flag waved.

Except for a few stragglers, the field stayed close together, which meant that paint trading and cold deformations were not long in coming. Towards the end of the race, the tone became a bit more “direct” – to put it diplomatically – and there was to be a duel for the win, in which local hero Ron Sheridan from London with his #52 was able to lure the spectators out of their seats once again.

On lap 35, coming out of the back straight, the race went into Turn 3, with the #20 Scott Lindsay in the lead, Sheridan on the inside with a broad shoulder and outstretched elbows, the spectators standing on their seats, “turn four, Sheridan takes the lead” resounding over the loudspeakers, Sheridan was in the lead and took the race win that evening – accompanied by loud cheers.

The grandstand quickly emptied, but we weren’t quite in the mood to leave yet, so we went down to the fence and noticed that the door to the track was open there. Since no one felt moved to stop us either, we went out onto the track, once to feel the concrete marked with rubber abrasion, to get an impression from the driver’s perspective, because from down here the grandstand looked more imposing than one would have guessed.

We strolled through the pit lane, watched the teams repairing the cars or servicing the engines, and we got a first-hand impression of how things work for the small racing teams.

What annoys me a bit just writing these lines is the fact that we had a cheeky mouth at every opportunity back then, but at that moment there was somehow nothing with a “can I have a picture”. There we were probably frozen in amazement, yes that will have been it!

Unfortunately, the moment came when we had to start the journey home. In the parking lot the farmer was already waiting with his pickup truck. Since he had agreed to drive us to the racetrack again the following weekend, we had the pleasure of first marveling at the Midas Trucks – roughly comparable to the NASCAR Truck Series – in a 30-lap race and then at the CASCAR Sportsman in a 100-lap race.

After these two fantastic experiences, the desire grew in me to see the “big ones” one day, to experience a Winston Cup race live on site. Even though it would take almost 20 years for this dream to become reality, I made it come true in 2020 at Daytona. 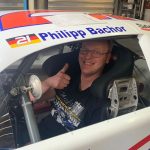 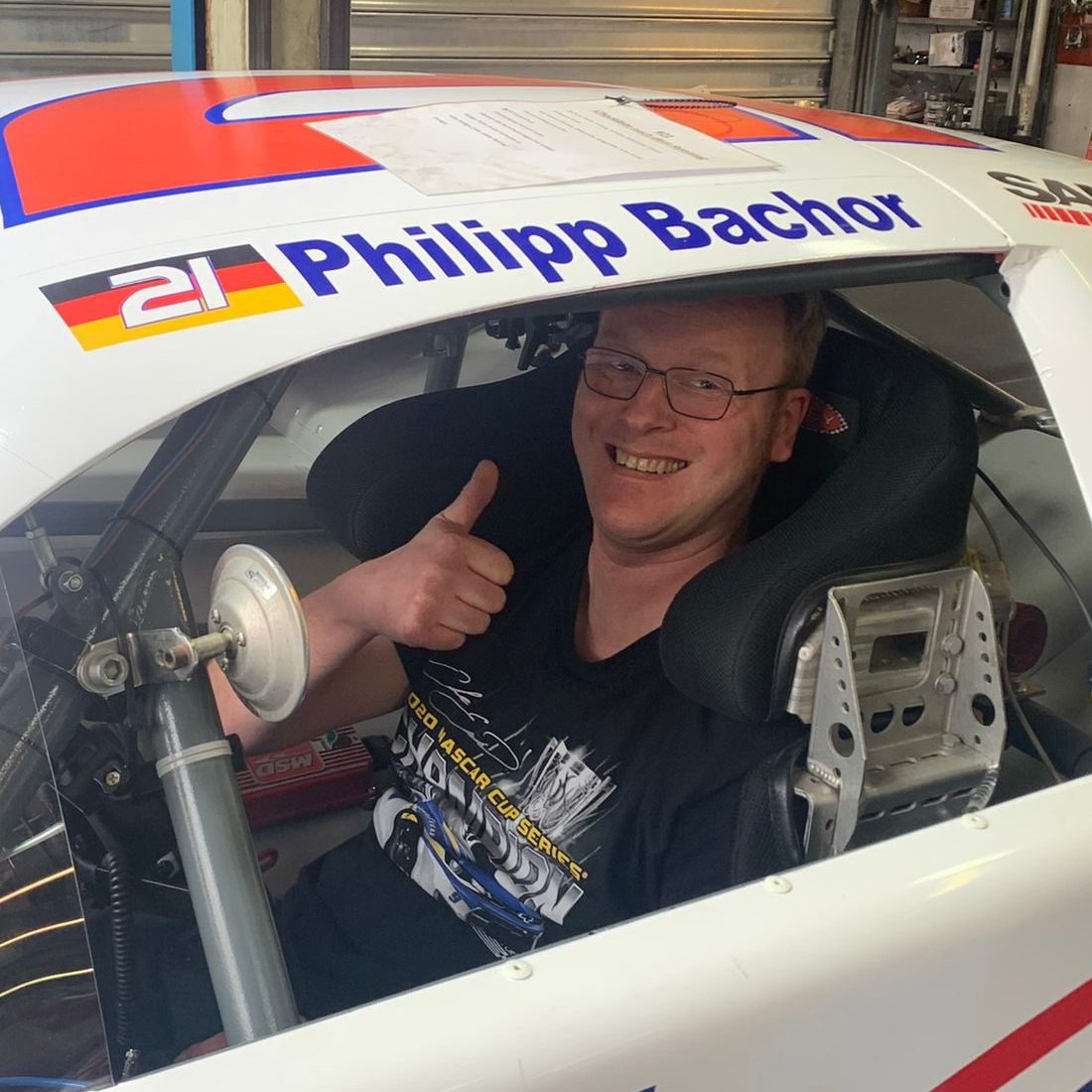