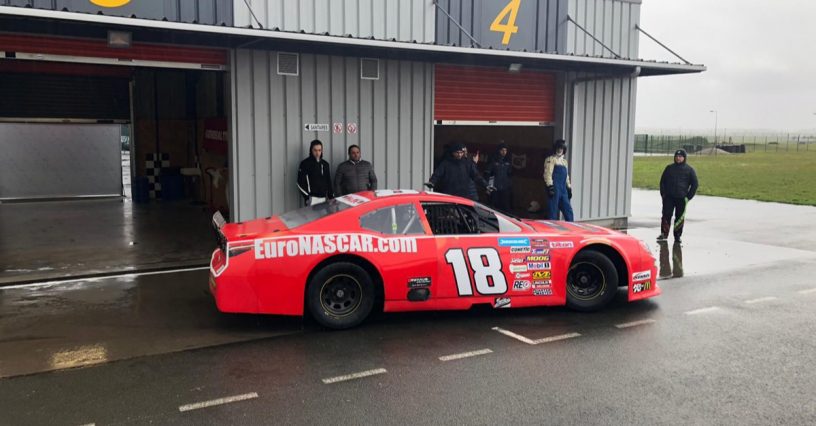 “The car felt very good and I felt comfortable right from the beginning,” Sokolovskiy told ‘Leadlap.net’. “Even in wet conditions it was nice to drive this powerful EuroNASCAR car. I’m considering driving both, the NWES and V8 Oval Series, but I have to sort some things out before I make a decision. I hope that I will be able to sign a contract in the beginning of the new year.”

Sokolovskiy participated in the V8OS at Raceway Venray in the 2019 season in his #48 car. The half-mile short track in the Netherlands is not only the home of the Late Model series but also the only oval race in the NWES schedule. In the 2020 season, EuroNASCAR will visit the track on July 11-12.

Gordon Barnes gained experience by racing in the V8OS and European Late Model Series (ELMS). He was at the wheel of the #24 Hendriks Motorsport car in the past. The Briton had to take a break from active racing but now tries to find his way back into a cockpit. Barnes recently tested a NWES car.

He summed up his test in Fontenay Le Comte in an exclusive ‘Leadlap.net’ interview: “I was surprised by the amount of grip the car has. In a Late Model you just let the car roll while the EuroNASCAR cars are way more responsible. When you turn the wheel, the front grips immediately.”

Barnes has not been active on road courses for a long time and had to adapt to the track in the beginning. That why he was not able to drive at the limit on the damp track during his sessions and that’s why he still has potential for improvements. He also had to re-learn a couple of things like shifting with a four gears H-pattern gearbox.

“It was a lot of fun to step on the throttle and hear the V8 sound of the car,” said Barnes. “I thank Jerome Galpin [NWES president] and the whole organization for this opportunity.” Barnes has yet not decided what to do in the 2020 season: “I have to find the budget and get my international license.”

Because of the missing international license a start in the EuroNASCAR Club Challenge is the most likely scenario for next year. Barnes said: “I always wanted to give those cars a try. It was an enjoyable day with some surprises and some similarities to the Late Model car. In the end the EuroNASCAR car is a proper European road course machine.”

Due to the high demand by several drivers, the NWES will offer an additional testing day on February 27, 2020. The recruitment day will take place in France and interested drivers can find all information to apply at the official NWES website. The test costs 900 Euros per driver.