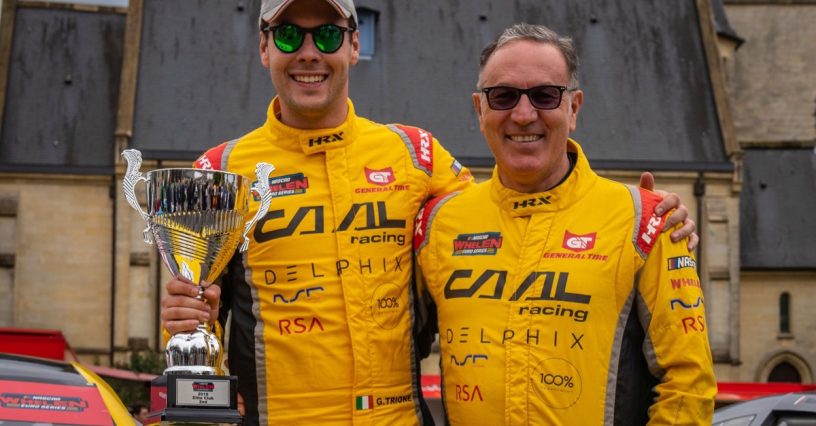 Often parents are real role models for young kids, which is why children often share the same interests as their family idols. In the 2020 NASCAR Whelen Euro Series (NWES), two father-son combinations will compete in the two championships and share one car each. From the Netherlands Sebastiaan Bleekemolen and his father Michael Bleekemolen will compete for their own team. CAAL Racing relies on the Trione-duo: Giovanni and father Mauro.

But there is a serious difference between the two combinations: Sebastiaan Bleekemolen competes in the EuroNASCAR PRO championship (ENPRO), while his father, at 70 years of age, wants to win the Legend Trophy in the EuroNASCAR 2 division (EN2). With the Triones it’s the other way round: Father Mauro starts in the ENPRO to get the Challenger Trophy. Rookie Giovanni will make his first steps in competitive racing in the EN2 Championship.

Mauro Trione and his moving story

For Mauro Trione, it is something very special to share the #31 CAAL Racing Chevrolet with his son, who already made his first experiences in the EuroNASCAR Club Challenge in 2019. In recent years, the Swiss has experienced how quickly the time spent together can be over when things go badly.

“Personally it’s so special to have him with me in the team. In 2018, right after Tours, I was diagnosed with a bad cancer and I had two surgeries. Now I’m okay and I see life in a different way and this experience with my son is a special one. Time doesn’t come back and we need to live as many experiences as possible together, who knows what’s next?”

Giovanni Trione is also looking forward to the time he will spend with his father: “It has been a dream for me since I was a kid. I always wanted to share a race car with him and while we did it already last year while I was competing in the Club Challenge, now we are fully connected by racing in the ENPRO and EN2 championships at all seven events across Europe. I’m really happy that everything worked out!”

Team Bleekemolen in search of speed

Sebastiaan and Michael Bleekemolen have been a well-established team for many years. The family from the Netherlands looks back on a successful motorsport history in various racing series in Europe. Dad Michael has even gained experience in Formula One. That’s why the Bleekemolens are taking a more rational approach, because the team finally wants to attack at the top in the 2020 NWES season.

“We are not happy at all with the results in the 2019 season. We are competing to win and my personal best result was a fifth place,” said Sebastiaan Bleekemolen. “My father did well in the Legend Trophy, which is great as he is 70 years old! We struggled with the brakes, but we think we have solved the problem over the winter. I hope we are set to fight for podium finishes in the 2020 season.”

“My goal is to grab the Legend Trophy in 2020,” said Michael Bleekemolen. “But I’m also aiming at reaching the overall podium in some races, so we have a lot of work to do in the coming season. NASCAR is great! The cars are powerful, the competition is hard and all race weekends are organised very well. I can’t wait to start the season in Valencia!”

Both father-son duos will go on the hunt for points for the first time on April 25-26 at Circuit Ricardo Tormo in Valencia, Spain. The races will be shown live on our Facebook page of Leadlap.de / Leadlap.net.