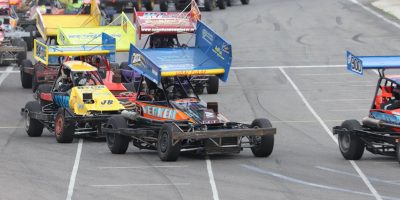 The engines are roaring again: First race in 2020 at the Raceway Venray

In 2019 Hendriks Motorsport won the NWES title with Loris Hezemans – But who is actually working for the team from the Netherlands?

In 2019 Hendriks Motorsport caused a sensation in the NASCAR Whelen Euro Series (NWES) and won the EuroNASCAR PRO title with Loris Hezemans. But the team from the Netherlands is also active in the V8 Oval Series (V8OS) at Raceway Venray and other race series around Europe. ‘Leadlap.net’ takes an exclusive look behind the scenes of the family business and championship team.

Roy and Joep Hendriks built up parallel businesses in 2009. While Joep Hendriks concentrated on the sale of racing parts, Roy Hendriks set up a small business for service and racing engines. It was not until 2013 that the two joined forces and formed the Hendriks Motorsport that exists today.

Since then, the Hendriks family has been servicing teams in various championships and supplies the V8OS teams with the necessary parts. Roy and Joep Hendriks now work around the clock on their company and even have three other permanent employees in their ranks.

During a NWES race weekend, about ten people work on the team’s cars and vehicles of other drivers in the championship that Hendriks Motorsport is responsible for. There is a clear structure within the team: Roy Hendriks is responsible for the operational business and the team, while Joep Hendriks takes care of sales and the general direction of the company.

Hendriks Motorsport also consists of many helpers who, according to Roy Hendriks, all have “the same value in the team”. The NWES team manager told ‘Leadlap.net’: “Hendriks Motorsport is a family business, which can also be seen at the track. Our team members all have the same value. This is what the team stands for! Together we are all one big family.”

“Bob, Jeffrey and I look after the cars as crew chiefs,” explained Roy Hendriks. “Erik, Dennis, Patrick and Ralph support us during the race weekends wherever they can. My father Sjraar drives the truck and also helps out everywhere. Toine Hezemans [Loris’ father] takes care of the tactics and Susan does the catering.”

This structure seems to be one of the keys to success, as Hendriks Motorsport only joined the NWES as an own team in 2018. Just one year later, the Dutch team won the title with Hezemans – a strong performance despite the team’s limited experience in the series.

Of course the powerhouse of Roy and Joep Hendriks has already gained a lot of experience in other series, which they transferred to the NWES. At Raceway Venray Hendriks Motorsport is active in the V8 Oval Series since many years, where late models are driven on the oval. The racing team gained road course experience in the Supercar Challenge, a successful GT championship.

Of course, this experience helped the team to quickly get used to the environment of EuroNASCAR. The learning curve went steeply upwards right from the start and after a short time the team developed into a real powerhouse of the series. In the 2020 season, the Dutch outfit will use three of its own cars and support another car on the technical side.

There are three drivers in the V8OS at Raceway Venray who count on the support of Hendriks Motorsport in the 2020 season. According to Roy Hendriks, the company will also supply many teams and organisations in racing with parts and know-how. “This ranges from road course racing to the Dakar Rally,” he said.

Roy and Joep Hendriks were successful racing drivers themselves

Joep and Roy Hendriks grew up with motorsports. “I thank my parents who brought us into racing. They and also the partners who support us are the reason why we’re so far ahead now,” said Roy Hendriks. But the two Dutchmen didn’t just focus on their company, they have been racing themselves for years.

Roy Hendriks competed in the Ministox class from 2000 to 2003, a typical junior championship in Autospeedway. From 2003 to 2013 he then competed in the Stockcar F2 – both on tarmac and dirt tracks. In 2012 he also gained his first experience in the Stockcar F1 and BRL V6. This was followed by a full season in the V8OS in 2013, after which Roy Hendriks concentrated on his tasks within the team.

Successful as a team

Since 2014, Roy and Joep Hendriks have been concentrating mainly on their own team, which is why they only occasionally take the wheel themselves. The Dutch are having great success: the team has already clinched two titles in the V8OS and won the Supercar Challenge with Henk Thuis. But the biggest success is certainly the NWES title in 2019.

But why did Joep and Roy Hendriks actually dare to take the step into the NWES? Roy Hendriks explained: “We wanted to be more active on road courses and find a series that matches our experience. We concentrate on American cars and that’s why EuroNASCAR fits us perfectly. When the opportunity arose, we seized it. We started with one car and we’ve taken four cars under our wing now.”

Winning the 2019 NWES championship is an important milestone for Roy Hendriks: “For me personally, this title means a lot. We work very hard all year round and also for our families at home it’s usually not as easy as many people think. To be at the top in the end is always the big goal.”

“It was very special to receive the trophy in Charlotte,” he added. “We only did that because we have such great people around us. We also have really strong drivers in our ranks.” In 2020, the team wants to win all the NWES titles, but that won’t be easy because of the “strong competition” in the championship. Hendriks Motorsport has already proven that they have what it takes to become a top team in European motorsport.

The engines are roaring again: First race in 2020 at the Raceway Venray