Showdown for the V8 Oval Series title at Venray 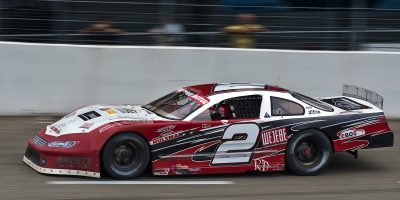 On Sunday, the 27th October 2019, the first Dutch champion of the V8 Oval Series (V8OS) will be crowned at Raceway Venray. Last year, Barry Maessen secured the series’ track title, but with the beginning of this season, the popular racing series received an overhaul and will now crown its first official Dutch champion.

In the three remaining races, everything boils down to a title showdown between Jentsen Adriaenssens, Jeroen van Eerd and Barry Maessen. The Belgian Adriaenssens, driving the #61 car, leads the standings comfortably with 1302 points in his pockets. The Dutchman van Eerd in the #33 V8 machine is already 199 points behind in second place on 1103 points. The (still) reigning champion Barry Maessen is third on 1076 points, 226 markers behind the leader.

One mistake can bring the decision

An easy ride for the Belgian towards the championship title it is then? With a maximum of 249 points available, that assumption may appear true. But the illusion of a safe lead is deceptive as the V8OS has a very tight schedule in between races, running three races in only one day. A DNF or heavily bruised car after the first race for Adriaenssens could suddenly turn the championship tables in favour of van Eerd or Maessen.

Whether Maessen will be among the title’s three-horse race remains to be seen, however. The Dutchman suffered a serious accident in the last race on 29th September, it is still in question whether the local hero piloting the #14 car will start.

Ralph Verberkt, driver of the #2 car and fourth in the championship, had also been injured and sidelined during the summer. Thus, despite his current winning streak of five consecutive races, the Dutchman is no longer in the title picture with a gap of 296 points to Adriaenssens.

Nevertheless, it will be exciting to see whether Verberkt will confirm his recent strong form with another victory and equal the new V8OS record for most consecutive race wins, held by Charles Lacarre. The young Frenchman, who has been missing the races in September and October due to search of sponsorship for 2020, set the benchmark earlier this year when he took six race wins in a row with Bachor Racingteam.

The German hopes are kept up by Philipp Bachor who lies fifth in the championship standings. The youngster at the wheel of the family-run #21 car lies only 11 points behind Verberkt. He plans on launching a full attack in a bid to fight for a top-3 spot in the final standings.