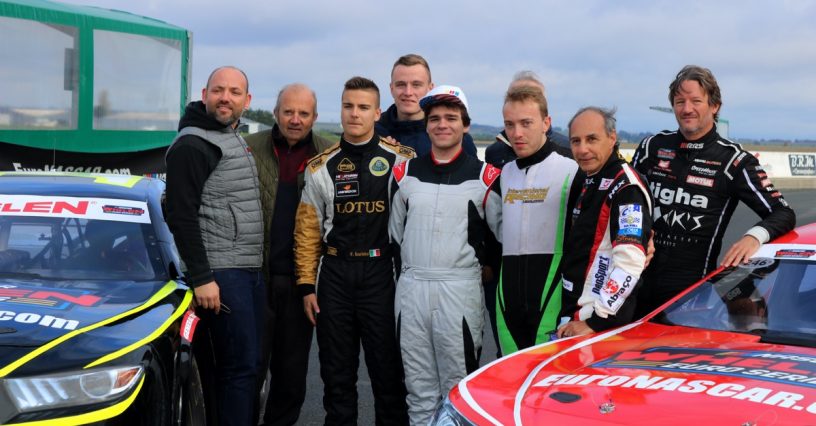 What a potential fairytale for Charles Lacarre! The young Frenchman took part in the first round of the official NASCAR Whelen Euro Series (NWES) recruitment test in Fontenay Le Comte (France), putting himself into contention for a scholarship to finance the 2020 EuroNASCAR season.

Back in August, ‘Leadlap.net’ sat down with the Nimes native for an extensive interview. Coming off a strong run of six consecutive wins in the the V8 Oval Series (V8OS) with Bachor Racingteam, the youngster was adamant he was “hungry for more”. However, the lack of funds forced him to forfeit the remainder of the V8OS season.

Now, fuelled by his passion for NASCAR racing, a turn in fortune suddenly sees Lacarre in frame for a EuroNASCAR race seat in 2020. He was one of the youngest participant to showcase for a NWES scholarship at the first of two overall recruitment tests, turning 20 years old later this month.

Nevertheless, his young age didn’t stop him from proving that his V8OS winning streak earlier this year was no fluke. With a canny and mature drive, Lacarre left a strong mark at the test track in front of the watchful eye of NWES CEO Jerome Galpin.

Stepping back into a race car for the first time since having to surrender his Bachor race seat in the V8OS three months ago, the Frenchman avidly told ‘Leadlap.net’: “I’m happy I could improve on each of the three sessions and it tells me that I understood the car, its reaction and that understanding allowed me to keep pushing it further.”

“The car felt docile and you could actually feel the rubber and chassis working. It was great to gauge how far you could push the car. I ended the day 0.180 seconds off the best lap time and I was told my overall laps were the most consistent amongst all drivers.”

“After all, it felt great to be back in a race car, a feeling that had left me since August. Thank you to Jerome Galpin for offering this opportunity and the whole NWES team for being there on Friday and providing a great service along with a great car. I met nice people and got along well with the other drivers, particularly Zach Banks, who came all the way from Miami, and Francesco Garisto from Italy.”

Two German talents were visiting the recruitment days in France. Tobias Dauenhauer and Marcel Lenerz have their home in GT racing at the Nürburgring, where the VLN races take place. Both impressed with their strong driving skills.

“It was just amazing, the V8 sound is fantastic and the car is so much fun, it’s pure racing. I love the fact you have no electronic aids, so it’s the driver who makes the difference,” said Dauenhauer.

Lenerz told: “It was really impressive and cool, it’s pure race driving, with no electronic filters between you and the car and the sound is just impressive. It was also my first time on a race car with an H-pattern gearbox and was really funny.”

Further test days are scheduled for December 12-13 in France, when another group of talents will get a taste of EuroNASCAR and compete for a scholarship. Interested drivers can still register on euronascar.com/recruitment.