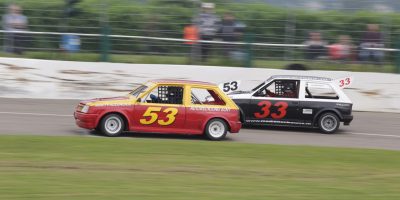 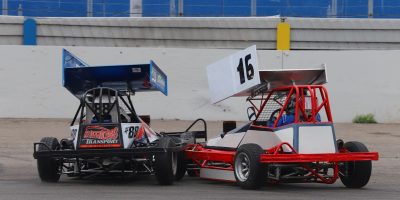 The National Hotrods and its spectacular and beautiful race cars are the top tier class in Autospeedway when it comes to the classes where contact is prohibited. In 2019, the touring car series with its Peugeot 206s, Opel Tigras, Ginettas, BMW Z4s and several other models provided thrilling oval racing that delighted the fans in numerous races. That’s why a look at the champions is worthy.

Lelystad, Posterholt, Ter Apel and Venray: this are the tracks that were raced on in the Dutch Championship. Twelve race days are counting for the championship and it was Johan Sanders, who crowned himself 2019 champion. The Dutchman scored 498 points and beat Reimon Bos, who was eleven markers short on the winner. The top-3 were rounded out by Mark Teuben in his unique blue Peugeot.

For the NHRRG Cup the driver visit the same four tracks but there are only nine race days that count for the championship. Sanders also won the NHRRG Cup ahead of Bos, who was second again. Tonnie Hendriks ended up third and grabbed the last spot on the podium.

Let’s take a look at the Raceway Venray, home of the famous and traditional SuperCup. The race winner was Bos in his #33 Opel Tigra. The track located close to Venlo seems to be Bos’ favorite track. The Dutchman scored equal points in the track champion as Niek Damstra, who was crowned champion.

The Circuit de Polderputten in Ter Apel is located close the Meppen. The track title went to Teuben, who beat his fellow National Hotrods drivers on the unique oval. The Dutchman finished ahead of Sanders and Bos, who closed the top-3. Damstra and Hendriks rounded out the top-5.

It was Sanders again, who won the track championship at the Midland Circuit in Lelystad which is located close to Amsterdam. The driver of the #17 Peugeot 206cc grabbed three titles in the 2019 season making it a very successful year for the Dutchman. There was no track championship held in Posterholt in 2019, but the track plans to have a title race again in the 2020 season.

Special announcement: Leadlap.net will serve as the official content partner of the National Hotrods and will provide the series with articles.