Posted by André Wiegold and Simon Mones on September 3, 2020 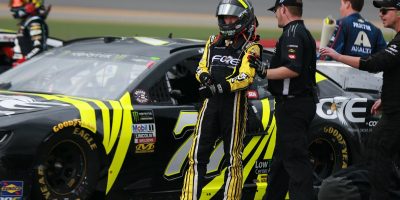 William Byron could certainly not have dreamed of a more beautiful week. The 22-year-old from North Carolina first celebrated his first victory in the NASCAR Cup Series last Sunday in Daytona and then, during the following days, received a new contract from Hendrick Motorsports which is valid until the end of 2022. This means that the team around Rick Hendrick will keep the talent in its ranks for at least another two years.

“It was honestly just a big relief”, said Byron in a Hendrick Motorsports press release. “I’ve been driving the #24 car for the last couple years and it was a relief to win that race in that car. There’s a lot of pressure that comes with that and the legacy of the car.

With his victory in Daytona, the enthusiastic sim racer has also qualified directly for the playoffs, which start next Sunday at Darlington Raceway. The second open spot was secured by Matt DiBenedetto (Wood Brothers), which is why Byron’s teammate Jimmie Johnson, for the second time in a row, did not get a place among the 16 title contenders.

Last year, the seven-time record champion also failed to qualify for the playoffs. Especially dramatic is the fact that this is Johnson’s last full-time season in the NASCAR circus. For the 2020 season, the Californien is thinking about an appearances in the IndyCar series.

Since the regular season is over, the playoff drivers have been determined:

Stewart-Haas Racing also has a new deal to announce: Aric Almirola will stay with the team around Gene Haas and Tony Stewart in the 2021 season with the support of Smithfield. Since the racing team does not rule out the possibility of signing the suspended Kyle Larson, only Clint Bowyer is now marked with a question mark.

Also the NASCAR Xfinity Series was a guest last weekend at the Daytona International Speedway in Florida. The race was won by Justin Haley (Kaulig Racing) after he pulled his head out of the noose in an accident just before the finish line.

After Talladega it was already the second victory of the season for Haley in 2020. The 21-year-old from Indiana is slowly but surely turning into a super speedway specialist. In 2019, he already achieved a sensation in the NASCAR Cup Series with Spire Motorsports when Haley won the summer race in Daytona after an early cancellation due to rain.

While the regular season in the NASCAR Cup Series has already ended, there are four more races in the second NASCAR league before the playoffs begin. Currently, in addition to Haley, Austin Cindric (five wins), Chase Briscoe (six wins), Noah Gragson (two wins), Harrison Burton (two wins), Justin Allgaier (one win) and Brandon Jones (one win) have each secured a ticket to the playoffs.

While the two top NASCAR leagues raced in Daytona over the weekend, the drivers of the NASCAR Gander & RV Outdoors Truck Series visited the World Wide Technology Raceway at Gateway. For a long time it seemed as if victory would go to Todd Gilliland (Front Row Motorsports), who secured both stage wins. However, the winner was Sheldon Creed (GMS Racing).

As so often in motorsports, it turned out that the race got in the way of the 20-year-old Gilliland, or rather the later race winner. During a pass in the final phase of the race the two collided and Gilliland had to pit again after a contact with the wall, while Creed sped to victory.

“(The win) feels great, but I want to start by apologizing to the #38 (Gilliland),” Creed said tio ‘NASCAR.com’ in an interview after the race. “It’s so hard to pass here and I got down into his inside and just was really loose getting in. He was really close to my door. They were having such a good day and me and Todd are buddies. I hate doing that to him. They are a strong team. He owes me one.”

In addition to the win, the 22-year-old secured a 50,000 dollars bonus in the Triple Truck Challenge. As it was his second win, Creed has already secured 150,000 dollars in extra cash.

The current Truck Series season will remain the year of surprising comebacks. After Travis Pastrana and Greg Biffle, Trevor Bayne is also returning to NASCAR after about two years in Darlington. The 29-year-old will be driving the #40 Niece Motorsports car.

Although Bayne already has 187 Cup and 152 Xfinity races under his belt, the race in Darlington will be his first start in the Truck Series. “This is such an amazing opportunity to get back on track and do what I love,” Bayne said. “Darlington is a track that requires both discipline and precision and that’s what I love about it.  I’ve never driven a NASCAR Truck, so I’ll definitely be talking to a lot of drivers to figure out what to expect. I can’t wait to take the green flag this weekend with the Niece Motorsports team.”