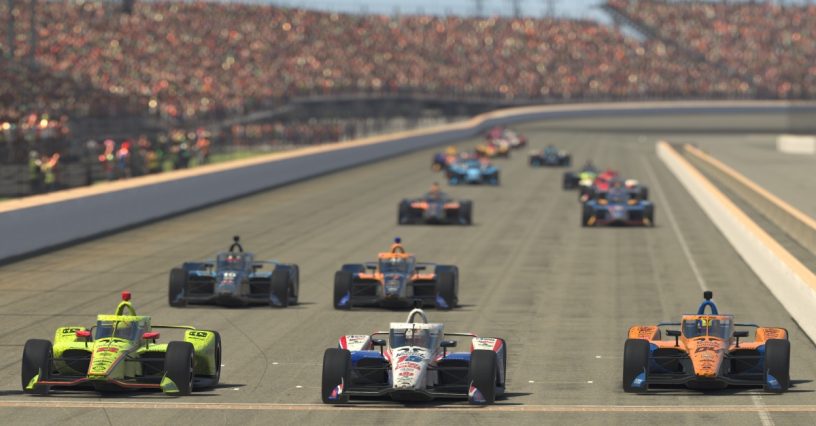 The final race of the virtual IndyCar iRacing Challenge at the Indianapolis Motor Speedway (IMS) was a very lively one. Especially an incident between Formula 1 star Lando Norris and the reigning Indy 500 champion Simon Pagenaud was the cause of heated emotions afterwards.

Norris had already made his IndyCar debut at the previous round on the virtual Circuit of the Americas and had sensationally taken victory at the wheel of his McLaren SP car. The young Briton was also leading the race at IMS when scandal struck shortly before the end of the race.

Simon Pagenaud collided with the leading Norris in his Penske car, which had fallen far behind due to repairs, and thus ended Norris’ race abruptly. However, what initially looked like a misunderstanding while lapping a backmarker soon took a twist and got a stale aftertaste.

Pagenaud, who broadcast his race live on Twitch, had announced to his fans shortly before the incident that he was planning to take Norris out of the race. Apparently the Frenchman blamed Norris for the fact that his car had to go to the pits for repairs earlier in the race.

Norris was not amused at all after learning what had caused the crash and publicly criticised Pagenaud’s behaviour. The Frenchman then apologized to Norris and admitted his mistake. Nonetheless, the two will probably no longer become best friends after the controversy.

In what was generally a very tumultuous final phase of the Indy 175, McLaughlin, reigning champion of the Australian Supercars, clinched his second win of the virtual season. After a last lap collision between Oliver Askew and Santino Ferrucci in turn 4 in front of McLaughlin, the New Zealander leapt from fifth to first place on the very last metres and snatched the unexpected victory just in front of Conor Daly.

It was McLaughlin’s second victory out of six races in the IndyCar iRacing Challenge. Thus the IndyCar rookie drew level with Simon Pagenaud, who also won two of the six races. The remaining two race wins were shared by Sage Karam and Lando Norris.

Since there was no official scoring for the six virtual races, no champion was crowned in the end. However, some drivers managed to increase their stocks on the driver market significantly with their strong virtual performances.

In the wake of the COVID 19 pandemic, events have had to be postponed or cancelled time and again. According to the latest information, the season will now start on 6th June 2020 at the Texas Motor Speedway, as the IndyCar Series announced on May 7.

In order to make this possible, the races will be held without public attendance. Also training, qualifying and races will be held on a single day. There will be clear guidelines to ensure social distance and the use of masks as well.

Two weeks after the season’s start on the 1.5-mile oval, the first road course will already follow on the calendar with the legendary Road America on June 21.