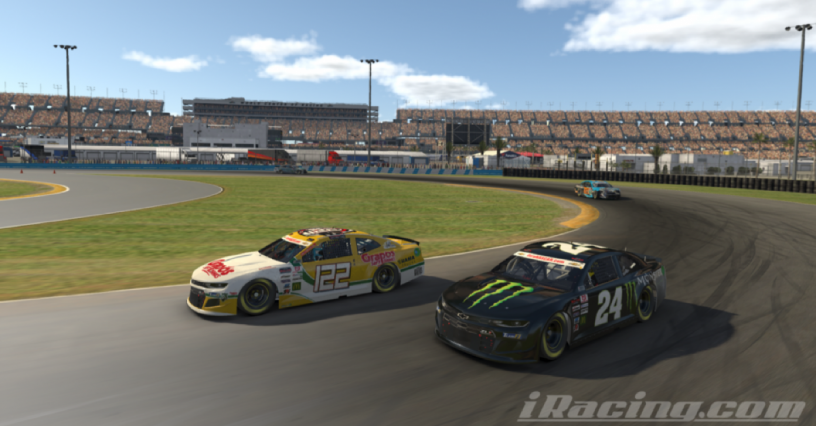 Pure excitement: the EuroNASCAR also delivered this in the virtual world – On the last lap, Andre Castro secured the win at the prologue of the EuroNASCAR Esports Series in Daytona

The NASCAR Whelen Euro Series (NWES) is back, for the time only in the virtual world, but even there the series offers what fans all over Europe like: exciting motorsport. In the highly competitive opening event on the virtual track of the Daytona International Speedway, Andre Castro beat Alon Day after a thrilling duel to secure victory in the prologue of the EuroNASCAR Esports Series (ENES). The US American only took the lead in the final phase with a bump and run against Day and then snatched his first ENES victory.

After the race, Castro apologized in the winner’s interview to Alon Day, who had already announced to pay him the bump back. But both also praised each other’s skills and made no secret of the fact that they had a lot of fun. Before the 30-minute main race, Castro had already won one of the three heats. Prior to that, it was Day who had taken pole position in qualifying just ahead of the US American.

“I gotta own up to that one. It was such a good race, we kept trading the lead and then down in turn 3 or 4 I figured out I could give him a little bump. It got a little bigger than expected, probably because of the lag,” said Castro after the race. “It’s something I expect to get in return eventually in the future. It was such a fun race. I didn’t expect it to be so close the entire time, bumper to bumper. It must have been really fun to watch as well. Huge thanks to Df1 Racing and the whole organization for putting this together.”

Day had also celebrated a win because the PK Carsport driver had won the battle against the current NWES champion Loris Hezemans in the first heat. His team-mate Jeffrey Roeffen won the third heat ahead of Eric Filgueiras. In the “Last Chance Qualifier”, in which the last six starting positions of the main race with 36 starters were awarded, rookie Davide Dallara sped to the win ahead of Justin Kunz.

In addition to numerous EuroNASCAR drivers, several guest entrants were also on the Daytona entry list. In addition to the series partners from the Hockenheimring and the Autodrom Most, Iker Lecuona, a guest entrant from the MotoGP, was also racing in the ENES prologue. The Spaniard raced with the support of Ford’s E-Sport Team and the Circuit Ricardo Tormo in Valencia.

Next week’s race of the inaugural ENES season in Brands Hatch marks the first points awarding round. In virtual Great Britain, the Indy layout will be used for the first round. The track near London is about two kilometres long and, along with Zolder, one of two tracks in the ENES schedule that are also visited by the NWES in reality.