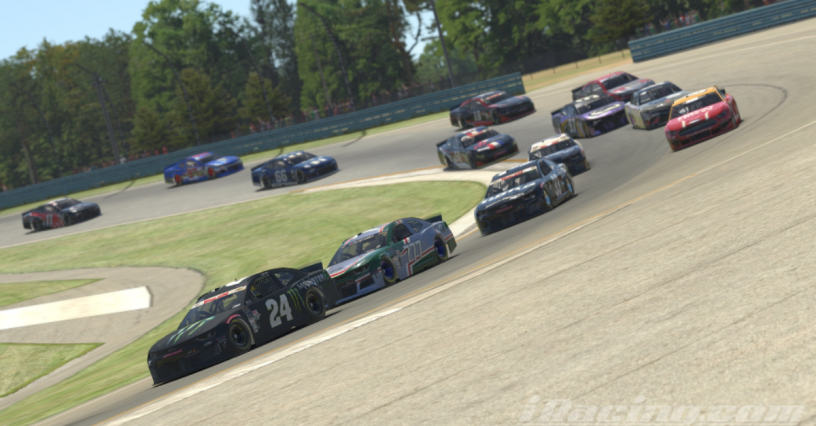 As the worldwide coronavirus pandemic renders real racing impossible at present, a handful of stars from the NASCAR Whelen Euro Series (NWES) made their official debut in the SimRacing world on 23rd March. The Italian iRacing CIN Cup Series made its stop at the traditional circuit of Watkins Glen (USA), where Alon Day, Loris Hezemans, Giorgio Maggi, Alessandro Brigatti and Ben Creanor took to the wheel as guest entrants.

Two-time EuroNASCAR champion Alon Day was the star of the day and dominated the event convincingly. Running his new Monster Energy car design, the Israeli first set the fastest time in free practice, before then going fastest again in qualifying and thus securing first place on the grid. Day finally won the race after 45 laps, despite a collision with a backmarker through no fault of his own, ahead of EuroNASCAR colleague Creanor and iRacing veteran Antonio Miccolis.

Hezemans, who started ninth, pushed his way forward during the race and fought a nail-biting battle in the final laps with Alessio Fabbri, the three-time champion of the CIN Cup Series. In the end, the Dutchman crossed the finish line just inches ahead of Fabbri and finished in fourth place.

Brigatti and Maggi also displayed their skills and were within striking distance of a podium finish for most of the race. Maggi’s hopes for a good result were shattered by a botched pit stop however, which meant that he had to return to the pits the following lap.

After a strong performance, Brigatti was heading for a safe third place, before the Italian severely damaged his car in the final phase of the race after a mishap while lapping another driver. The two youngsters lost a lot of time due to their incidents and thus finished their races only in 10th (Maggi) and 25th (Brigatti) place.

After numerous exciting wheel-to-wheel battles and positive fan reactions to the race at Watkins Glen, as many as seven NWES drivers will be entering the next virtual round on 27th March. Hosted by the French i-FRN league, the event will take place at the virtual Charlotte Motor Speedway. The race at the 1.5 mile oval will be broadcast on the EuroNASCAR YouTube channel from 9pm (CET).