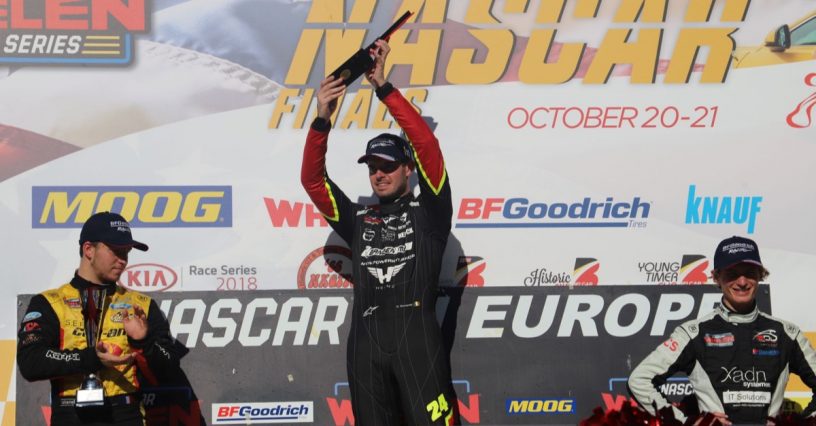 In 2017 and 2018, Guillaume Dumarey caused quite a stir in the NASCAR Whelen Euro Series (NWES) with PK Carsport. In his debut season, the Belgian finished second in the EuroNASCAR 2 Championship (EN2). He scored two race wins in Franciacorta and in front of his home crowd at Circuit Zolder in 2018. In 2020, the 33-year-old will be back on the grid to target the championship win.

The break that Dumarey had to take had very positive reasons: His daughter was born in 2018, so time with the family was naturally a priority. But in the new season, the racer from Gent wants to attack again. The NWES is always the first choice for him and he also explains why.

“I’m very excited to be back,” said Dumarey to ‘EuroNASCAR.com’. “I drove in different kinds of championships in my career and it is hard to beat the experience you get in EuroNASCAR. The V8 engines, the pure and fair racing as well as the large number of fans are an unbeatable combination. I will need some mileage to get back to speed for sure, but there is still time before the season kicks off at Valencia in April, so I still have some weeks to prepare myself.”

The Belgian has also clearly formulated his goals: “You don’t drive for PK Carsport to fill the pack. The team expects you to run at the front of the field. And that is exactly what I will try to do. As always in EuroNASCAR, the competition will be there and very hard and there is another challenge for me as I don’t know two tracks on the schedule: Most and Vallelunga.”

Should Guillaume Dumarey win the title, he will follow in the footsteps of his younger brother. Maxime Dumarey has won the EN2 championship in 2014. In the history of the NWES, the two are the only brothers to have won a NASCAR race each.