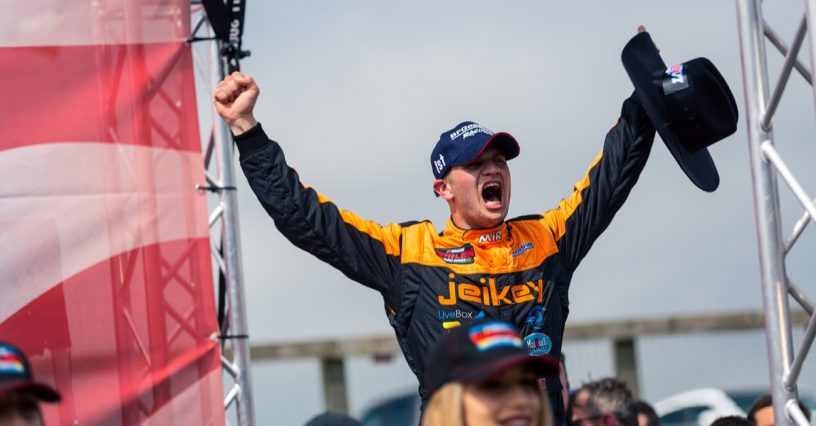 After Alon Day’s goodbye, CAAL Racing had a cockpit available – with Gianmarco Ercoli the team has now brought a familiar face back in its car

The silly season of the NASCAR Whelen Euro Series (NWES) is in full swing. Just a few days ago, two-time NWES champion Alon Day announced his parting from the Italian top team CAAL Racing to join PK Carsport. A few months before the start of the season a cockpit was therefore available for a driver with championship ambitions in the EuroNASCAR PRO division.

CAAL Racing found such a driver in Gianmarco Ercoli. “The ambition is the same as the other 30 drivers on the grid: winning. We want to be competitive for the win right from the start and score as many points as possible because with such a strong competition in the NASCAR Whelen Euro Series, the margin for error is getting smaller and smaller every year,” said the Italian.

For Ercoli, the move to CAAL Racing also means a return to the team where the NWES adventure began for him. At the age of 19, the Italian made his NWES debut in 2015 for CAAL Racing in the EuroNASCAR 2 championship at Brands Hatch. Ercoli knew how to convince. The Italian drove to the podium twice and switched to Racers Motorsport afterwards.

“With CAAL Racing we always had a good relationship and we kept in touch in the last few years and I am really happy to join them in 2020. We already did very well together and we want to pick up where we left. I’m sure they are perfectly prepared and we’ll have to work to hit the ground running in Valencia,” said Ercoli, who already took part in an early test session with CAAL Racing.

“I want to thank everybody at Racers Motorsport because we had five great years together. Now I’m ready to open a new chapter and I’m looking forward to hit the track again soon!”

The footsteps Ercoli is following must be big in any case. On April 25-26 the NWES starts into the new season at the Circuit Ricardo Tormo in Valencia, Spain. It’s the first opportunity for Ercoli to show his new team what he’s capable of.